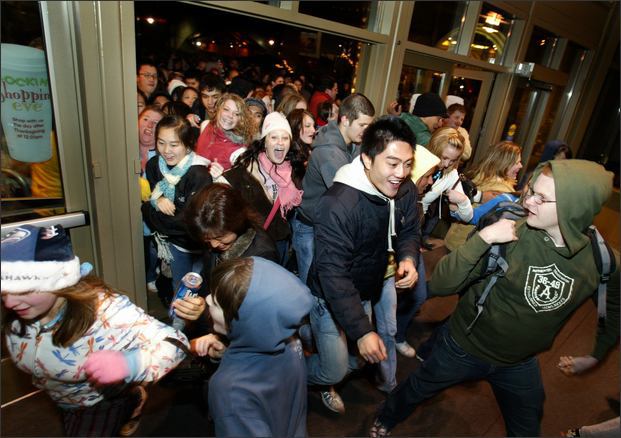 Black Friday- or rather, Black Thursday- is infamously known as a day of chaos, violence, and American consumerism at its absolute worst. Especially since the late 2000’s, increasingly large, ravenous crowds have descended upon retail stores, on the hunt for deals with slashed prices, and in turn, the Black Friday events have steadily crept back onto the evening of Thanksgiving. But is America finally starting to get sick of Black Friday?

Black Friday is no stranger to violent and bizarre incidents. Even this year, the first year that Cyber Monday sales overtook those of Black Friday, there were still several skirmishes among maddened shoppers.

One unknown 19-year-old was shot and severely wounded at a mall in Missouri, and an entire mall in Alabama was forced to shut down due to a massive string of fights. One notable fight at that chaotic Alabama mall, which was caught on video, was between two women on the second floor. A shoe was thrown in the crossfire, and smacked a baby in the head. The mall brawl is eerily similar to an incident in 2015, in which a mall in Kentucky erupted into fistfights over a pair of Air Jordans.

In a darkly amusing, clever attempt at bypassing the endless lines, deceitful shoppers at numerous Walmarts and Best Buys on Black Friday donned employee vests- either stolen or bought off social media or past employees- and tried to sneak into the building.

However, as far as Black Friday violence goes, this year is close to average. The year 2008 was arguably the most infamous, notable, and bloody Black Friday on record. Some notable incidents from that year include a catastrophe in which a Walmart employee was horrifically trampled while attempting to block a stampede, and a particularly violent event in which two men died in an unexplained, senseless shootout at a Toys R Us in Southern California.

This year was the first year that Cyber Monday sales overtook those bought at brick-and-mortar stores on Black Friday. Nonetheless, Black Friday sales increased from last year. Undoubtedly, news of idiotic violence between frenzied deal-hunters discourages shoppers from going out- after all, you can’t get stabbed or shot over Jordans, TVs, or game consoles if you shop from the comfort of your home. Ironically, Black Friday is becoming an increasingly popular trend in Europe- sales from the event overtook Cyber Monday sales by 78 percent in Great Britain.

Only time will tell if Black Friday will slowly fade away into nothingness, or if the gladiatorial arena of Christmas shopping will continue to thrive.