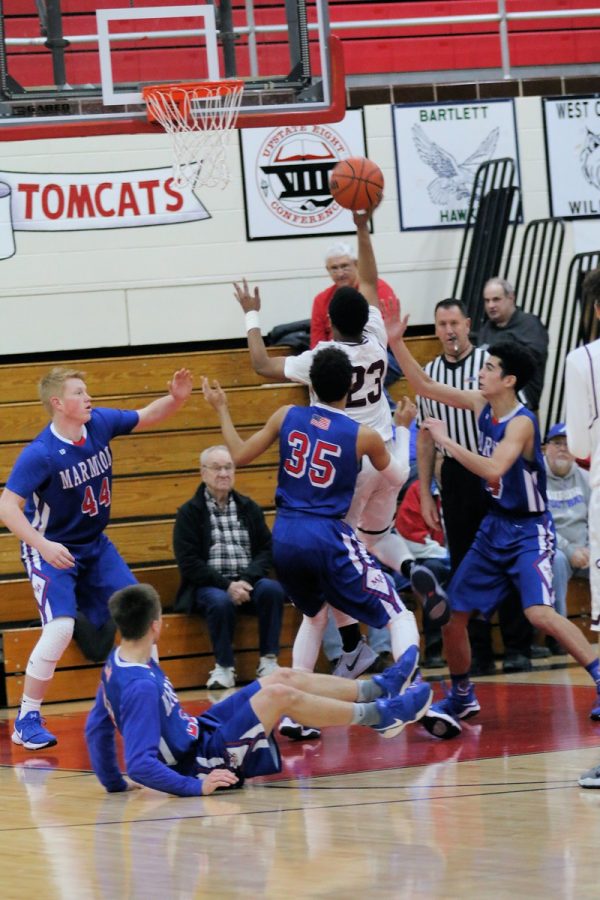 Twenty games into the season, the 8-12 Cadets have been dealt unfavorable cards, but are not allowing adversity to derail their aspirations. Instead, this period has been a catalyst for the team’s continued growth.

Solidifying defensive success has been the main focus of this year’s coaching gameplan, but now the Cadets must defend against recent adversity to thrive.

First, senior Seth Groom is out for the year with a herniated disk in his back. Secondly, junior Cole Rainforth is also out with injuries. Thirdly, the season is mentally taxing as well. The schoolwork doesn’t slow down and the games are just as tough on the brain as they are on the body. Learning the system and executing the plays has been no small task.

And it is the manner that his team has played with that earns them the designation of “resilient” according to Coach Young.

“[The players] are fighting. I’m not an easy guy to play for—I’m crazy, I’m nuts I know I am—and I want [the players] to be the same way. Even if you make a mistake, a competitor just fights through. We’re dealing with a lot of turmoil.”

From this turmoil, Coach Young believes his team will naturally grow. In fact, the struggles are preparing the Cadets for a playoff run in March.

“We just gotta keep fighting it. We can get over the hump, [the players] are so much more talented than they believe they are. The gameplan is to have [the team] prepared for March.”

In Illinois high school basketball, all teams automatically qualify for the March state tournament. Coach Young has reiterated time and time again that all games leading up to the playoffs are “practice.” He is pleased with how far his team has come since day one, but recognizes some shortcomings.

“It seems like we got stuck in a rut for a second. We’ll go up we’ll go down—so consistency with us is going to be the biggest thing.”

The consistency crucial to maintaining success has been absent from the team. They can’t seem to get into a lunar flow like the tides. The record that has hovered around .500 tells the story of the season according to Coach Young. So far, they have not been able to string together victories. They have been consistently inconstent.

“We’ll play well—we’ll win some games—then we’ll slide and lose some games. I feel if we can consistently continue to get better, [we will] be at our peak in March.”

Despite growing pains, Coach Young sees evident growth in his team since day one. He is working to pass on his dedicated passion for the game to his players. The intensity the Cadets play with is commendable, but he thinks that a little extra juice may be the difference.

“I’m a competitor and I’m trying to get [the players] to be the same way. I think if they can love the game and be as competitive as I am, then a lot of those little issues that we’ve had—even if we make mistakes—we’ll [be able to] fight through.”

The construction is underway—thought not complete—but the figure is taking shape.

Before tough, closely fought losses to Glenbard South (56-47) and St. Laurence (60-58; A Tommy Surges buzzer beater three was just off the mark) the Cadets had won 3 out of four sporting a scoring differential of +56 points over the contests. Coach Young senses a promising shift.

“I think we’re right on the cusp of turning the corner. And I’m hoping before March that we get a chance to turn that corner and we can shock a couple teams. We’re going to shock some people. When that happens, I want to be able to ride that wave into the state tournament.”