The Life and Death of Memes

Some among us may recall the “golden age” of memes all the way back in 2016. A wide breadth of iconic memes proliferated and flourished throughout the year, each one “surviving”- that is, staying relevant and funny to the niche meme community- for a long, productive month.

Some of us may fondly smile back on Dat Boi, Harambe, and We Are Number One, the memes of May, July, and December 2016, respectively, and perhaps enjoy them still. But others might be glaring back on them with disgust and exhaustion. The hapless images were posted, reposted, and altered so many times that they ceased to have comedic value entirely.  Instead, they would often induce groaning and disgust amongst their former audience.

Meme culture is generally extremely elitist. Once a meme becomes popular among a mainstream audience, it ceases to be popular among the niche audience that brought it to popularity. Meme creators fear their beloved creations becoming warped and overused by those who do not understand their context or value. When a meme achieves widespread appeal, to the meme pages, it’s as if a fruitful inside joke has been co-opted by people who don’t understand why it’s funny. Instead, they simply know that it’s supposed to be funny, and use it accordingly. If a meme is not fully understood, it is likely to be misused in a way that is either not humorous, or lacks the intended purpose of the meme community. It seems as if nobody can understand and laugh at a meme except for the community that created it- if a meme loses its insularity, it loses its humor and uniqueness, and simply becomes another tired, old, misused trend.

The highly cyclical trend of meme life-and-death that began after the downfall of Harambe’s relevancy in August 2016 still continues today at an even more frenetic pace. Memes come to life and die unceremoniously within weeks, or even days. The Tide Pod-eating meme, which was born in the dying days of 2017, died an abrupt death after about a week, when it was found that some people were taking the memes too seriously and actually digesting Tide Pods, sometimes with fatal results. The Ugandan Knuckles (“Do you know de wae?”) meme, the first to originate in 2018 itself, was popular among the meme pages that brought it to prominence for a mere five days.  now, it is entirely discredited among them, widely popular but relegated to the accursed ranks of the so-called “normies”, or the wider audience of internet users in general.

A few outliers survive for months or even years.  The Drake Hotline Bling template has survived since mid-2016, at the absolute earliest, and is still seen on occasion today.  Deep-fried memes, or memes that have been overlaid with filters to the point that they’ve been hopelessly distorted, blurred, and grained, became popular in early 2017 and remain somewhat popular even in 2018, though less so than in their heyday.

Memes scarcely exist as they did in 2016. They’ve gone from being innocently enjoyed by “normies” and meme pages alike to becoming objects of initial humor, then semi-ironic mockery, then painful banality and elitism.

Is this a step in the right direction?

Or is it a regression to insular and incomprehensible inside jokes?

The increasing turnover rate of memes due to “normification” has resulted in memes becoming increasingly bizarre and impenetrable. The beloved “You Know I Had to Do It to Em” meme, which revolves around photoshopping a young, grinning Italian-American man clad in a pink shirt, a single earring, and a gold watch onto different backgrounds, altering his appearance or the background in a comical way, or replacing him with similarly posed characters, remains popular among the niche meme community since its debut in mid-2017. 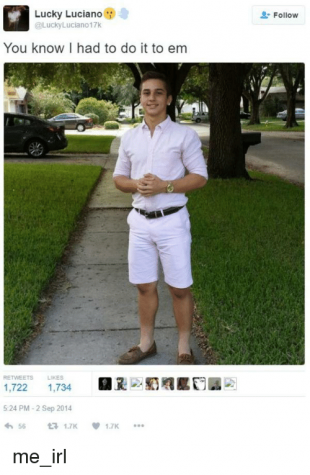 You Know I Had to Do It to Em, though not widely popular, remains massively popular on the niche meme pages that created it.

The meme, though hilarious, is likely too absurd and insular to achieve widespread popularity. It will almost certainly not be adopted by the dreaded “normies” and subject to complete discrediting among its creators.

Additionally, “surreal memes”, often featuring gradient backgrounds, bizarre text, stock photos, or poorly-made CGI models, have developed as a response against the popularity-fueled deaths of memes. Enjoyably unusual and genuinely surreal, their creators on r/surrealmemes take great care to weed out any semblance of regularity among them, dutifully avoiding the horrific fate of “normification” in any form. For the most part, they are succeeding. 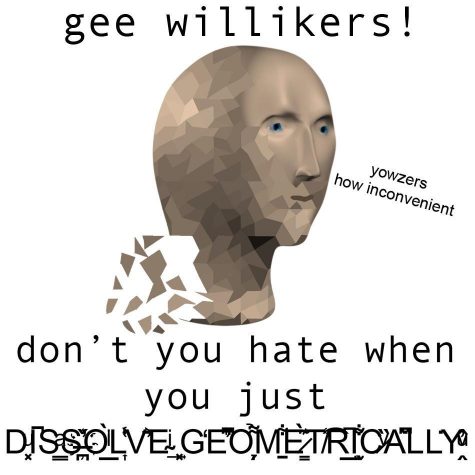 An example of a surreal meme, featuring the “Meme Man” floating head.

Is this the fate of memes?

Will memes become stale, long-lived, and formulaic, enjoyed by the masses?

Or will they ascend to the state of distorted abominations, only humorous to their niche communities, staying relevant for mere seconds?