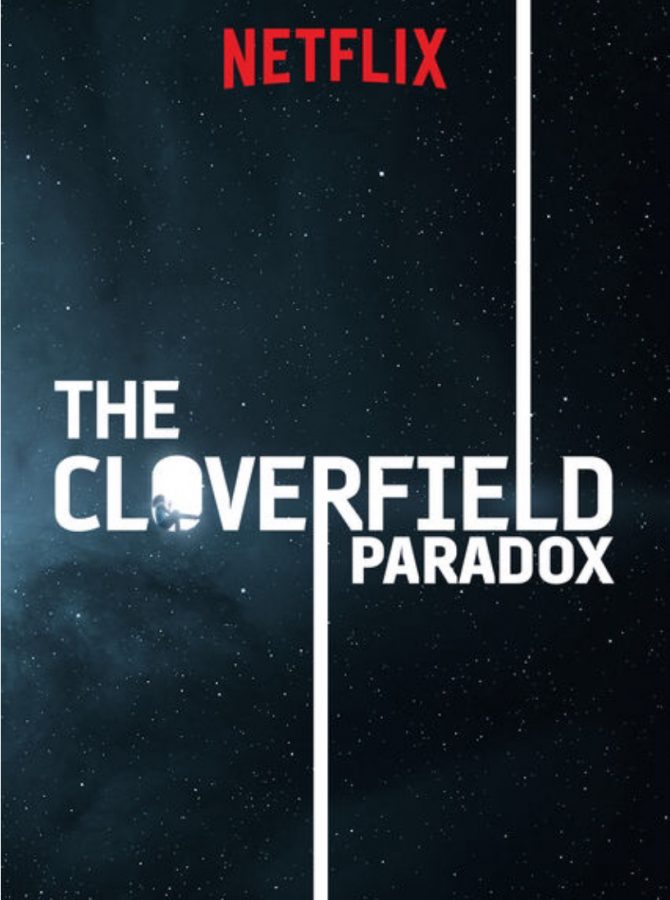 I like the Cloverfield movies not because they are well-made movies, but because they are unique.  Back in 2008, the first Cloverfield was connected to a very famous viral marketing campaign.  In the first teaser, the title wasn’t even revealed.  The elements of shock and awe drove the film to positive reviews and critical success, making $170.8 million worldwide.  In Cloverfield, a monster ravages the city of New York with no motive and no origin.  I find the first film to be pretty good, though the shaky camera will make the strongest of stomachs nauseated. 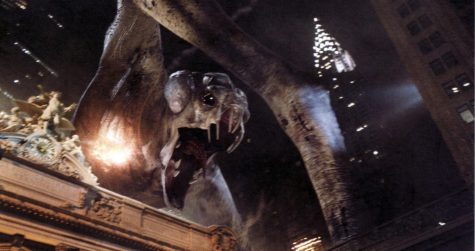 What drove the film for me was the conspiracy theories.  Near the end of the movie, in the distance off the coast of Coney Island, an unknown object falls from the sky into the ocean with no explanation. At the end of the credits, radio static can be heard. When you play the clip backwards, the message “it’s still alive” can be heard.  The movie is a decade old but fans still pour themselves over these details, trying their absolute best to find an explanation.

Confusion only heightened with the release of the sequel, 10 Cloverfield Lane.  This film’s advertisement was also very strange.  The film was so under wraps, the first trailer and official title weren’t revealed until two months before the premiere. JJ Abrams, the producer of the Cloverfield films, created and filmed a Cloverfield sequel under everybody’s nose.

Once everyone could see the movie, they realized that instead of answers, more questions were brought about.  Thematically, the films are similar; that is the only common thread.  In the whole movie!

I absolutely love 10 Cloverfield Lane.  It is so intense and claustrophobic.  Besides the supernatural ending, this thriller is very grounded and simple, yet so complex.  It is much superior to the original Cloverfield.

Needless to say, I was very excited for the next Cloverfield movie.  The new film came about with the title God Particle in 2012 with J.J. Abrams’s Bad Robot Productions.  After suffering through development hell, a fate some films don’t get out of, Paramont announced it would be distributing the film in 2016.  As the film got delayed more and more, speculation arose about the film being another Cloverfield movie.  Finally, we reach Super Bowl Sunday on Febrauary 4, 2018.

After getting a delayed release date for April 20, 2018, there was talk of a debut trailer for the new movie during the Super Bowl.  Netflix was also supposedly interested in buying the movie from Paramont.  I went into the Super Bowl excited for this trailer.  When the a quick 30 second spot came on the screen with a new title —The Cloverfield Paradox— I freaked.  A movie I have been waiting for is finally coming…but to Netflix.

It is no secret that movies from Netflix are a death sentence, except for the phenomenal Mudbound and Okja from last year.  Netflix’s mediocre movies can never live up to their great shows.  The end of the commercial spot said “Only on Netflix Coming Very Soon”.  I was slightly taken aback but none the less still excited.  I quickly hurried to my Netflix app to see it on the homepage.  Then I saw this: 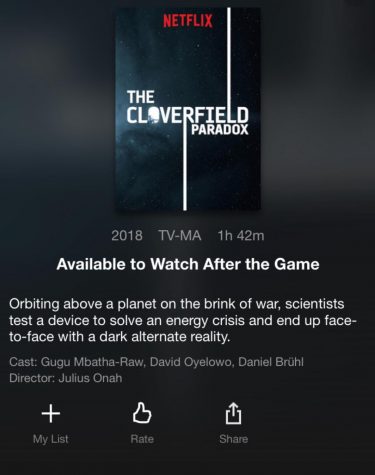 My jaw quite literally dropped.  A big budget movie is able to be streamed three hours after it was announced, right after the game.  Something like this has never happened before.  J. J. Abrams is at it again, changing the movie game.

The first reviews came out the morning after the Super Bowl.  My heart again sank.  They were ABSOLUTELY AWFUL.  At this time, I hadn’t seen the movie yet.  As of writing this article, the movie currently sits at a 17% on Rotten Tomatoes.

After watching it myself, I can say it’s the most riduculous movie I have ever seen!  Around the halfway point during the movie, a severed arm with no blood pouring out of it starts moving on its own with no reasoning.  That is when I stopped watching this movie with any sense of realism or sophistication.  And afterwards, I actually slightly enjoyed myself.

The best part of the movie is the acting, specifically from Gugu Mbatha-Raw.  Between this and the landmark, Emmy-winning, phenomenal episode of Black Mirror “San Junipero”, she is one amazing movie away from stardom.

I would talk about the plot of the movie, but there is really nothing concrete to say.  A bunch of astronauts try to save the planet by shooting it with a particle accelerator.  Eventually, they lose the Earth and weird stuff starts happening.  Really dumb but nonetheless enjoyable space action ensues.

The movie is not good, but it absolutely does not matter.  The typical cut-and-paste methods of production are changed.  Regardless of the reviews, so many people watched The Cloverfield Paradox, five million in the first week.  If this movie went to theaters, it would have been DOA with the first reviews, but Netflix made it an instant financial hit.  This film is a definite step forward for all films and streaming content for years to come.