What Are We To Do After a School Shooting?

The awful carnage of the Marjory Stoneman Douglas school shooting on Valentine’s Day continues to send ominous ripples throughout the nation weeks after it occurred. Its aftereffects, ranging from the trauma and terror of the survivors to the blazing debate over gun control, have settled upon the nation like a dense, foreboding mist. 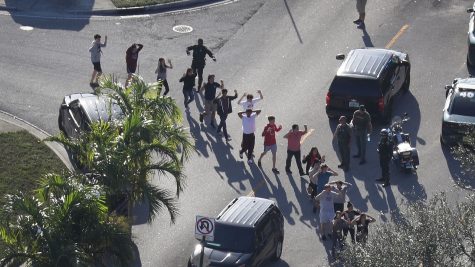 Getty Images PARKLAND, FL – FEBRUARY 14: People are brought out of the Marjory Stoneman Douglas High School after a shooting at the school that reportedly killed and injured multiple people on February 14, 2018 in Parkland, Florida. Numerous law enforcement officials continue to investigate the scene. (Photo by Joe Raedle/Getty Images)

Strong emotions inevitably come to the surface after a tragedy. Some zealots call for the confiscation of all guns in America; some Constitutional devotees endlessly defend the Second Amendment and refuse to yield an inch; some shield themselves from the fallout under a barrier of “thoughts and prayers”; some sick individuals praise the shooter who killed 19 innocent people. But one question weighs on everyone’s minds: What are we to do about school shootings?

There is no easy solution, unfortunately. Addressing mental health alone, although the shooter’s mental condition undoubtedly played a part in his massacre, will not address the problem of underage gun ownership and might increase stigma against mental illness. Hanging back and doing nothing on grounds of defending the Second Amendment will infuriate those personally affected by the tragedy. On the opposite end of the spectrum, a congressional anti-gun crusade will enrage conservatives and devotees of the Second Amendment everywhere and would likely lead to mass civil unrest.

President Trump has suggested arming teachers- in short, allowing trained teachers to carry guns inside schools for the purpose of defending students should the worst occur. But even this idea has its flaws. The small handguns that teachers would be allowed to carry pale in the face of the oft-used AR-15, which can fire bullets at a rate that is three times faster than many pistols. Additionally, there is always a risk, albeit, an astronomically small risk, of a mentally unhinged teacher going on a shooting rampage, or, in schools prone to violence, the risk of a teacher using a gun to stop fighting students out of fear or stress. While arming teachers is a much better idea than confiscating all guns, restricting freedoms, or doing nothing at all, it is in all likelihood inadequate to protect students.

Even stationing law enforcement and military at schools has its flaws. Infamously, the single Broward County armed guard stationed outside of Marjory Stoneman Douglas, for one reason or another, did not enter the school to stop the shooting. Instead, according to eyewitness reports, he simply sat outside with his gun pointed in a defensive position. The disgraced guard has since resigned amid immense criticism. As demonstrated by cases like this, even the use of police or armed guards is not guaranteed to be 100% effective in stopping school shootings.

I personally support the use of extensively trained armed guards to protect schools, but I acknowledge the idea has its flaws. Even if that is what is necessary to stop shootings, it reflects an eerily dystopian state to the rest of the world.

Above all, we cannot let this tragedy divide us. America is at a state of division, strife, and partisanship not seen since the tumultuous and violent year of 1968. It’s too much to ask of today’s Capitol Hill but what is needed is a bipartisan solution that blends reasonable gun control measures and preservation of treasured American freedoms. The FBI and police forces need to respond more seriously to shooting threats; the police and FBI repeatedly investigated the shooter’s home and received tips but did nothing.

Even Donald Trump, ever divisive and polarizing, is adopting a more compassionate approach, conducting “listening sessions” with the survivors of the shooting.

The shooting is a horrible tragedy, and my heart goes out to everyone affected by this grisly act. A peaceful and sensible solution is the least we owe the victims and the grieving who knew them.