The future of Marmion basketball. 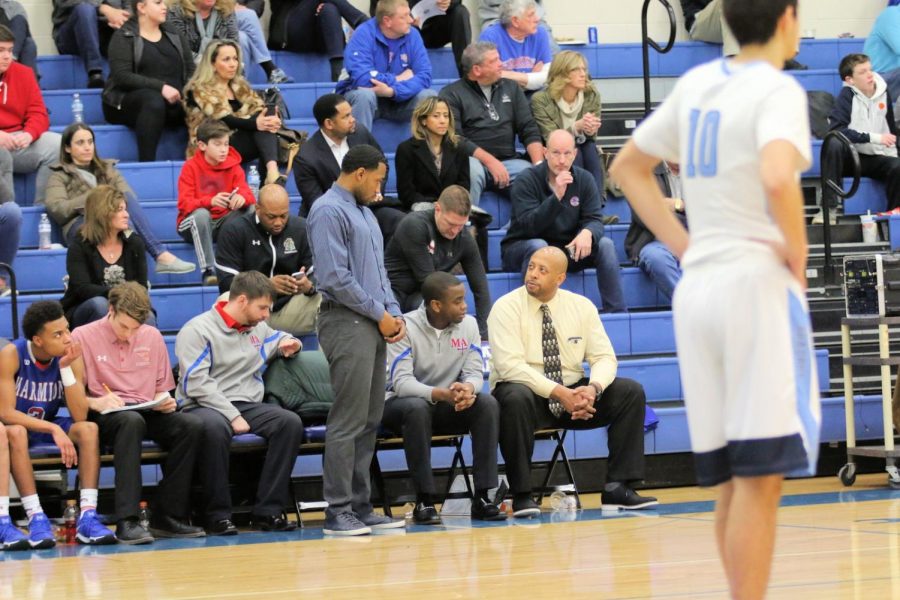 After a season as volatile as the stock market, the Cadets are looking to build off of the equity they established. In essence, Coach Anthony Young is working to evoke consistent growth to assemble a team that pays dividends in the future.

Even before the season, the team’s main priority was to lay the groundwork for the program. For a first-year coach to enjoy future success, certain ramifications must be made in year one. It is very difficult for a new coach to fully integrate their style and gameplan. Coach Young admits it was tough for the players to initially buy in to his scheme, but saw them begin to come together near the end.

“[At the end of the season] things had started to click. Sometimes it sucks because things start to click when it’s too late and I think that’s what happened to us.”

The volatility of the season saw peaks such as Mick Sullivan’s game winning dunk that defeated ACC. But with every peak there was a deep valley like the excruciating 75-44 loss to Leo High School. Albeit, there were signs that made everyone aware of the construction for future success.

The final buzzer ending the Cadets’s 74-61 loss to Nazareth appeared to the untrained eye as another loss in a season of mostly losing. However, to those close to the program it was a salvo that signaled the beginning of a new era of Marmion basketball.

“We just started to learn [this season]. We’ll have a summer, a spring, a weight program; it’s a lot of things that go into building a [strong] program.”

But as this season ends and Mick Sullivan graduates, next year will once again present a learning curve.

No one will lie and say that losing someone of his size and skill will go unnoticed, but Coach Young does not think the group needs to fill Mick’s size 18 shoes.

“I don’t think we have to replace Mick at all. He’s gone, I loved him. Great career, [but] we’ll move forward.”

Coach Young understands that he cannot base past successes as the key to the future of his program.

“We won’t have a huge big man in the middle of the floor so we’re gonna have some freedom and some options to do some other things and experiment more. That will be the fun part about next year.”

In spite of the forthcoming ideas and challenges, the main basis of the program will remain defense.

And it is through this defense oriented philosophy that Coach Young will build his team with more players who want to invest themselves into the program. Because of the paucity of a super-star player, a deep bench is necessary.

“It’s about being dedicated to the team. Once we get our values down, then the program will grow. I don’t see Michael Jordan walking around here. We need a whole team.”

For too long, Marmion basketball has shown signs of impending growth, but has always reverted back to the mean.

Coach Young is infusing a mentality that wishes to eradicate mediocrity from the program and instead focus on long term growth.

“We need to get people proud of what we are and what we’re doing. We gotta get that mediocre attitude out of here. It’s not not okay to just compete, let’s strive for greatness.”

Now that the groundwork has been laid, Marmion basketball is ready for a bullish future.

Time to buy some shares.