“The Rise of Skywalker” is a Messy Crowd-Pleaser 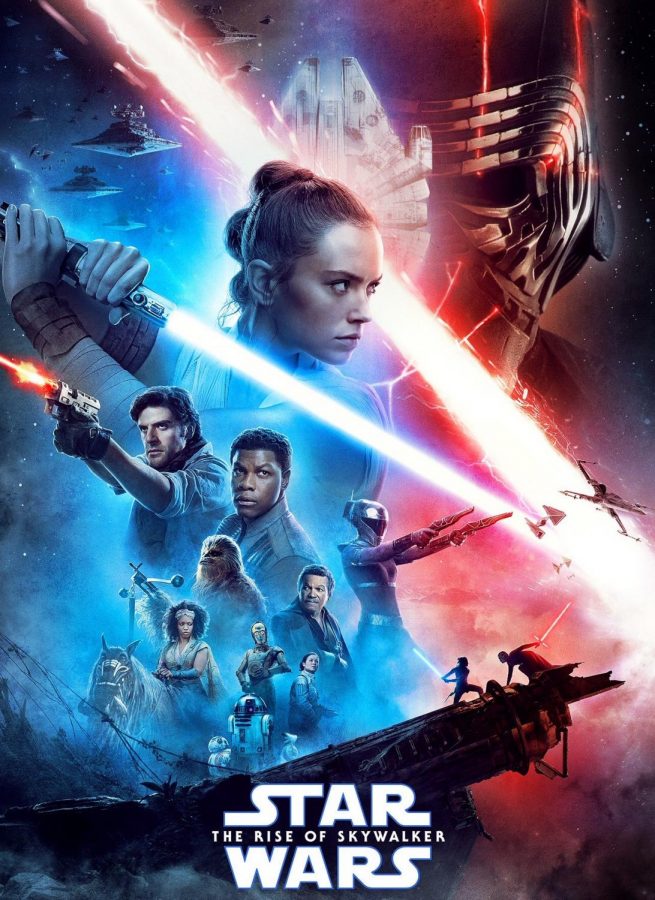 In terms of studio franchise filmmaking, few movies have had a stranger development process than the recent Star Wars trilogy. Originally, there were three directors hired to helm them: JJ Abrams for Episode VII, Rian Johnson for Episode VIII, and Colin Trevorrow for Episode IX. Things seemed to be going smoothly until Trevorrow was fired from Episode IX just a few months before Episode VIII’s release. Disney and Lucasfilm cited “creative differences” as the reason for his sacking, but regardless of the motivation behind it, most of the general movie-going audience members were happy with the decision since Trevorrow is a director of exclusively bad films, like Jurassic World and The Book of Henry. However, this now posed a difficult question for Lucasfilm: who do you get to direct this film that is supposed to be released in a little over two years? They could not bring in somebody who was not already involved with the development of this trilogy, so the only two options were to bring back Johnson for his second Star Wars film in a row, or have Abrams direct it. They chose the latter, meaning that JJ Abrams would be the director of the bookends of the trilogy and Rian Johnson would direct the middle film. This is where The Rise of Skywalker’s problems began.

The Last Jedi, the second film in the new trilogy, released two years ago, and while it is, of course, a masterpiece, it is also an incredibly divisive film. One of the major decisions that Johnson made on that film was to disregard many of the setups and mysteries that Abrams established in The Force Awakens. Elements like Snoke’s origin and Rey’s parentage were either thrown away or answered in extremely unexpected ways. This is one of the reasons why The Last Jedi is such a masterful and bold entry in the series. However, many Star Wars fans were displeased with the answers they were given, causing endless, toxic online discourse that continues even today.

So how is this relevant to The Rise of Skywalker? Abrams certainly never intended to direct another film in this trilogy, but he clearly had ideas of how he would end the story if he were to direct all three of them. It also seems very clear after seeing this movie that Abrams was not satisfied with some of the decisions made in the previous film. As such, Skywalker has a very stubborn quality to it, where it seems like Abrams is directing a sequel to his own film, rather than a conclusion to the previous two. Without getting into spoilers, there are many story decisions that seem to directly contradict or retcon elements of The Last Jedi. Now, not all of these choices are necessarily bad, but they generally feel very safe and are simply worse than what was given in the last film. Another side effect of Abrams’ stubbornness is the insanely breakneck pace of this movie. There are very few moments when the movie slows down and gives you time to absorb what you are seeing. Skywalker often feels like one long exposition dump because it is barreling towards a conclusion that the previous two films did not seem to be setting up. It is akin to driving smoothly down the highway until you suddenly feel the wheel jerk to the side and take you onto a different exit than intended.

Luckily, there is still plenty to enjoy in The Rise of Skywalker. Having the trio of Rey, Finn, and Poe all together for the first time is a smart choice for this film. Adam Driver and Daisy Ridley are the standout performances this time around, and many of the scenes with Rey and Kylo were some of the best of the trilogy. This is also a very funny movie, with C-3PO getting most of the killer jokes. Abrams manages to make the Leia scenes feel mostly seamless after her tragic and untimely death. JJ Abrams is a good action director, and his skills shine through, particularly during the lightsaber fights. Perhaps the most remarkable part of this whole trilogy, despite its shaky development, is that the four main characters (Rey, Finn, Poe, and Kylo Ren) each have consistent, coherent arcs throughout all three films. At no point during the movie did any of them do something that seemed out of character.

The general consensus seems to be that, if you liked The Last Jedi, you probably will not like The Rise of Skywalker, and if you did not like Jedi then you probably will. It is incredibly frustrating that Abrams seemingly decided to make a film that tears down much of what was previously established with the hopes of pleasing every single person that sees it. What he failed to realize is that it is impossible to satisfy everybody with a movie. No matter how hard one tries, there is no way to make a film that is unanimously perceived as good. The Rise of Skywalker tries to do exactly this, but by trying to fully satisfy everybody, it seems unlikely that it will fully satisfy anybody.