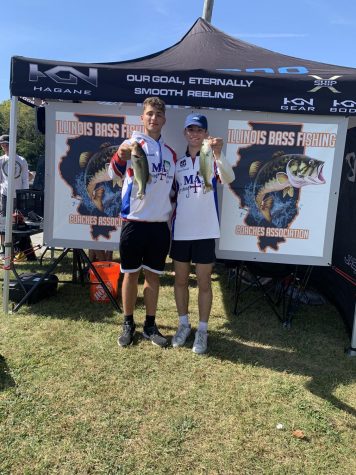 Last weekend the Bass Fishing Tournament Team went to Jacksonville Lake south of Springfield about 3 hours away. The tournament started at 7 am with Marmion entering3 boats in the tournament. Overall there were 30 boats. Boats go out in flights about 10 minutes  in between with of roughly 10 boats per flight.  Boats are out competing for 5 hours. Each boat has a limit of 5 fish with a minimum size of 12 inches, and fish caught must be large or small mouth bass.  The boats have live wells, like a fish tank,  that keeps the fish alive on the boats until the tournament is over. At the end the boats return and with their fish. The fish are placed in a large bag of water and weighed to determine the winner. Fish are released at the end back to the lake.

In this particular tournament, Marmion Seniors,  Alex Massoth and Vince Tinerella,  placed in the top 12 out of 30.  They reeled in three fish, but one was only 11 1.2 inches.  Senior Tim Moon and his team mate placed second place in the entire tournament and with the win they qualified for State in June!