What if the protest of kneeling during the national anthem spread into our own school? 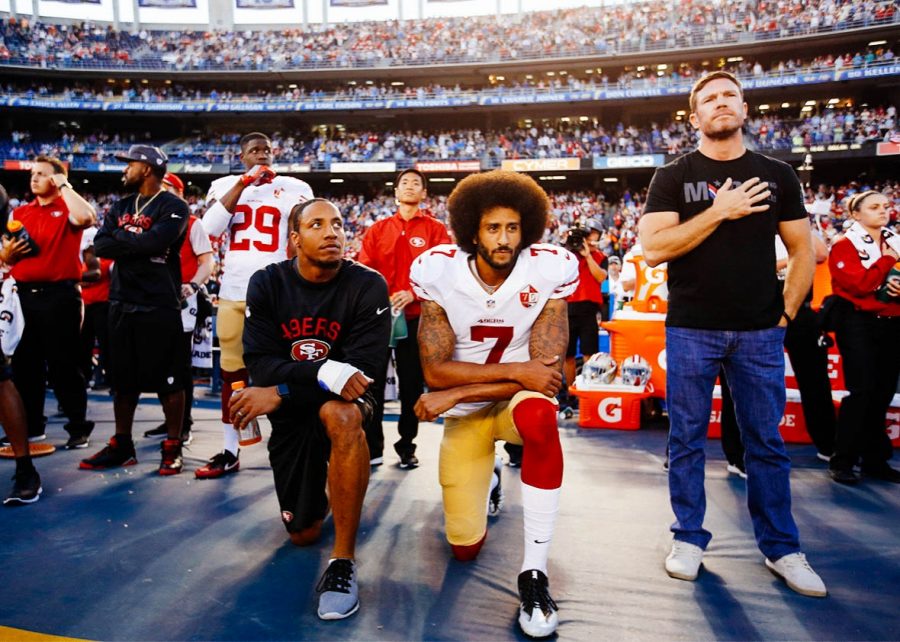 Kneeling during the national anthem has swept across the nation like a bald eagle in flight. This protest is not simply relegated to professional athletes, however. High school athletes have protested as well, and it is not beyond reasonable doubt that athletes at Marmion Academy could soon follow suit.

Athletes across different sports and backgrounds have protested by kneeling to combat injustices they believe are hurting our country. Colin Kaepernick has become the face of the protests. He protests to raise awareness and directs his actions and words at a government he believes does not suit the needs of all. “I am not going to stand up to show pride in a flag for a country that oppresses black people and people of color.”

Since Kaepernick delivered these words last season, the protests have only picked up steam. President Donald Trump added to the controversy when he said the owners need to fire the “sons of (expletive) who are disrespecting the flag.”

Since the protests have spread, the idea is reaching all corners of the sporting world. As it gains more support, the protest is being welcomed by all ages. What would happen if a Marmion Academy student-athlete were to join the discussion and protest?

Because politics are so unique to each individual, the responses and different viewpoints of peers and faculty could impact the “brotherhood.” However, despite being a family of brothers, there are differing points of view.

While kneeling is a peaceful protest, many believe it is an ineffective way of speaking out.

Senior Mark Fillar who completed basic training this summer and has enlisted in the army, did not condemn the action even though he will be defending the country and the flag. Instead, his stance is a unique one in the fact that he does not choose which side is right or wrong.

“I don’t care what political opinions are from football players. If I want political insight, I’m not going to listen to sports figures.”

While Mark Fillar does not deem the protests necessary, new basketball coach Anthony Young takes a different approach. He speaks to a need for better understanding between peoples and sides. He respects the actions as well as individuals’ rights to use their stature to promote change.

“I understand [the kneeling protests]. And I totally think at that level if you have a platform, [and] you feel that’s the best way to express yourself with that platform, I’m not against it.”

“It’s not the veterans that the problems are with, it’s the system. It is about a desire for the government to do better, not to disrespect.”

Although Coach Young understands the issue and respects athletes’ subsequent protests, he makes it clear that athletes must comply to requirements of their institution.

“Certain places have certain rules and at some point you have to respect the rules around you.”

If a player on his team were to kneel he said that he would respect the action but recognizes it is up to the institution.

Football coach Dan Thorpe approaches the protests with a “traditionalist” opinion. As someone whose father served in World War II on Guadal Canal and Iwo Jima, Coach Thorpe has been brought up to respect the flag and holds its symbolism as extremely important to our country. This is reflected in how he wants his players to always stand for the anthem and sees standing for a few minutes a small price to pay for our freedom.

“I’ve been brought up to respect the flag; the flag is extremely special. The national anthem is special, and so I would prefer everyone stand and bite the bullet for three minutes to honor our country.”

Although the national anthem is not sung before cross country meets, coach Dan Klatt said he “respected the people’s right to [kneel]” but was sure to note that, as a coach, his players would be liable to the rules he were to put in place.

Although Coach Klatt respected the people’s rights to kneel in protest, he said that the organizations in charge of players can “create expectations for those athletes.”

“You can do what you want, but you also have to deal with the consequences of your behavior…perhaps there’s a more unifying way to do that.”

Coach Klatt recognizes that the intent of the athletes to unify is “important”, but also says that the perception is “of equal importance.”

“If the perception of what you’re doing is completely different from what your actual intent is, it’s your responsibility to be aware of the perception.” 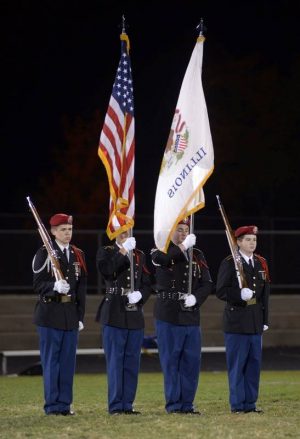 The expectations of Marmion students to respect each other are traditionally honored. Coach Thorpe says that this need for respect would allow his locker room to avoid any conflict if he did in fact allow it to take place.

“I think people respect other points of view.” He called his team a “melting pot” of different political opinions, varying economic statuses and different races. The team is closely knit as the different people create a “nice mixture of society.”

Coach Young, even in his first year, says that he does not believe there would be conflict as a result of disagreement. Here, the community of different opinions is respectful.

“In our environment, and the way we are at Marmion—the closeness and openness—I don’t think we’d have an issue like that.”

He also believes the brotherhood would overpower any political differences.

“I think if one person stood that strongly, you would probably have more people that would stand with him than would try and stop him. That’s truly the kind of vibe [at Marmion].”