2017 Hurricane Season- Is it the Most Destructive One Ever?

Hurricane Maria, the strongest hurricane of the season, just north of Dominica.

This year has seen a multitude of hurricanes with destruction we have never seen before.

Many are asking whether this season is apocalyptic in scale. It’s no wonder the theory that the world would end September 23rd was so widely believed. But in truth, how does the 2017 hurricane season measure up to past years?

Is it the worst yet?

Within a month of each other, three devastating storms hit America or its territories – Harvey flooded Houston in August, Irma devastated Southwest Florida in early September, and Maria reduced Puerto Rico to a near-wasteland later that month.

Despite those attacks from Mother Nature, hurricane season still isn’t over.

Hurricane Nate hit coastal Louisiana over the weekend, and Tropical Storm Ophelia just formed out in the Atlantic, (although it won’t threaten America). 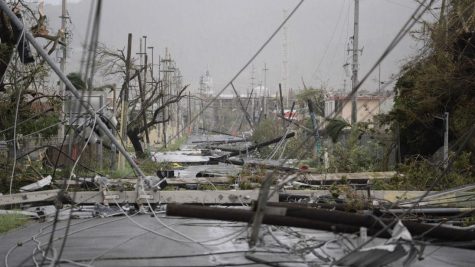 To be fair, this hurricane season is unique and dangerous in several ways. This is one of only six years that multiple category 5- or maximum intensity- storms have formed, and also hit land. Four hurricanes have made landfall in America thus far. There’s no doubting that this year has brought, and may continue to bring, unspeakable devastation. But it’s only fourth place right now for the number of recorded storms, nowhere near the apocalyptic 2005 hurricane season. Many of us are too young to fully remember. But that was the year that Hurricane Katrina swamped New Orleans, the year that Hurricane Wilma- the most intense hurricane to ever form- battered Cancun and south Florida, and the year that Hurricane Rita caused a deadly traffic jam in Houston that killed many more than the storm itself did.

Certain models predict that due to Hurricane Harvey, this season will be costlier than 2005, but it has not been quite as devastating or active. In fact, so many hurricanes formed in 2005 that the list of names ran out, and meteorologists were forced to use letters of the Greek alphabet to name storms.

This year, we’ve only reached the letter O. Although the 2017 hurricane season has been undeniably cataclysmic, it could have been far, far worse, and pales in comparison to the disaster that was 2005 and the havoc that it wreaked on the Atlantic basin.

Hurricane Wilma, the strongest recorded hurricane, about to hit the Yucatan in October 2005.

Some point to global warming as the cause of the recent hyperactive hurricane seasons, and truthfully, this cannot be fully denied.

Hot water in the Gulf is essentially hurricane fuel, and increasing air and sea temperatures will likely lead to stronger hurricanes. Nonetheless, global warming can’t be entirely blamed for the recent increase in strong storm systems – to a certain degree, hurricanes form by random chance by interaction of oceanic currents and warm air moving off Africa. Global warming has not been proven to increase instances of tropical waves, or African pre-hurricanes, nor does it affect all areas of the Atlantic Ocean equally or change ocean currents.

One theory states that hurricanes are steered by a mass of high-pressure air in the ocean west of Portugal called Azores High, which moves slowly over the course of thousands of years. When it moves a certain way, hurricanes are mostly steered towards the Atlantic coasts of Florida and the Caribbean, as they are now. However, when it moves a different way, as it did around 500 years ago, catastrophic hurricanes routinely strike the Gulf coast of North America and Mexico.

Soil samples from Central America show that in the early 1500’s, a gigantic hurricane, unlike anything ever seen before or since, unequaled in strength, hit the area and caused the collapse of local Mayan cities.

This was long before global warming set in.

All we can do is hope that this high-pressure air mass west of Portugal stays the way it does now and doesn’t trigger a new, incomprehensibly intense epoch of hurricanes.

The situation right now is less than ideal, but it could be far, far worse.